This writeup is for the reversing challenge “Web Assembly” we solved during 2017 Google CTF Quals. This writeup was submitted to the Google CTF Writeup Competition and won a $500 prize.

Some parts of this writeup will include background information about the concept. 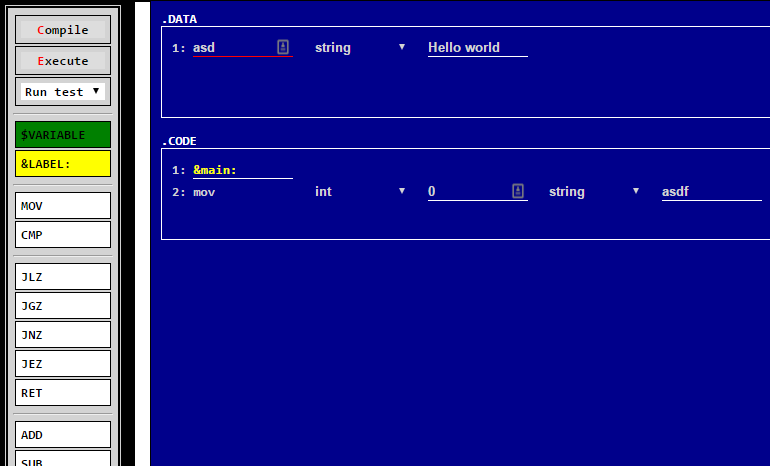 This challenge takes place on a very retro looking page the lets you drag assembly instructions from the sidebar into the main page. One button lets us compile the code, and another lets us run it. There are also a list of test cases. A quick glance at the source shows that they have implemented a simple assembly architecture and vm on the client side.

We are given several unminimized javascript files. I will quickly list what each is responsible for:

One of the testcases checks our code’s output against the flag. If it matches, it will print the flag out to us. Since we cannot know the flag to output it, we can assume that we need to find a bug in the VM and gain javscript execution.

The first step is in asm.js, where our data is parsed and compiled to a byte code. This process is fairly straight forward.

There are three datatypes:

If a label is used, it looks up the location as an integer. However, it also sets the high bit of the byte that reperesents what data type it is. This is important for later, so I modified the code to let me set the bit by prepending the type with a *.

The actual instructions are also encoded as a byte.

Finally the ‘data section’ is encoded similarly to the data types, and stored at the beginning of the output byte array.

Here is the code of two important opcodes:

Get value will recursively call its input until an error is thrown. This is used to either return the non-function for the normal values, or call the function for the pointer values:

The other opcodes are fairly straight forward, but also we will only need these two for the final exploit. All these functions are put into an array called memory, with the data section starting at index 1.

Breaking Out of the VM

The bug in this implementation is pretty simple. When we access some value in memory, we are not limited to numbers, since we can use force a string to be a pointer by setting the high bit. When we do this we gain access to all the attributes of the javascript array such as __proto__.

In Javascript pretty much every type is an Object. Objects have attributes that define what they do, many of which are backed by the native interpreter, depending on the object’s type. These attributes can be accessed with either the . operator, or ['key'] notation.

Note that the same __proto__ is shared for a given class, so if you modify it, objects of the same type will also be affected by the changes.

In javascript there are many ways to try and escape sandboxes. Our eventual goal will be to call eval('our data') or Function('our data')().

If our goal is to run Function('our data')(), we need to be able to arbitrarily call Function, however we don’t actually have a reference to it anywhere. Luckily, you can also use constructor, as long as you got the constructor reference from a function.

If so many __proto__s confuse you, the TL;DR is that we can turn memory into a function object temporally, allowing us to access a function constructor.

The only problem now, is getValue:

As you can see it will continue to call what ever we try to access. If we want to store a function, we need getValue to return a function. The only way to do that is to cause an exception. Looking at the array’s functions, I found __defineGetter__, which takes two arguments. If only one is given, such as in getValue, it throws an exception. Perfect!

So far our exploit is:

First we want to grab the constructor from the now-function memory object with mov int 0 *string constructor, which will do memory[0] = memory['constructor'].

The next challenge is to actually call it with our payload. It is easy to call, all we need to do is mov int 0 *int 0 but this will end up doing memory['constructor'](memory) thanks to getValue. Unfortunately this throws an exception as it tries to do memory.toString, but toString is function’s toString’, and not expecting and array.

We can fix this by restoring memory’s __proto__ with an array, much like how we did made it a function before.

However, where do we get an array? We can’t even call memory’s constructor to make one, since it is a function now… Luckily there was the get opcode:

fds is an array with a normal __proto__, so we can do get string __proto__ string constructor which will run memory['__proto__'] = fds['__constructor'](). This makes memory and array again.

memory.toString() works again, but what does it actually produce? For an array, it functions like memory.join(','). This will give us our data separated by commas.

For this to be valid javascript, we can stick our payload at the start, and comment out the rest:

To do this, we can simply stick our payload in the data section, and move it to index 0, while moving a */ to a very far off index.

Here is our payload now.

Now that we have arbitrary javascript running, we need to figure out how to get the flag. The code is running in a webworker, which is somewhat sandboxed. It cannot access the dom, or the location of the old page, which is where the flag is located.

So now we can look at how the parent is reading the response from the worker. We can send any responses we want now, so there may be a bug there too.

test.js sets the worker, with a callback for onmessage.

We can see that if the answer attribute of the returned data object is not equal to the expected output, it will reject, and terminate our worker. However, if we are able to cause an exception before worker.terminate();, we will be able to continue sending guesses.

Looking at TestCaseError we can see that data.test is appended to a string, meaning toString will be called:

It is easy to cause an exception here, by making test.toString not a function:

Now we can guess as many times as we want. As long as we get it right once this code will be called:

We can do this easily:

At this point we would have to make this code both small enough to make <400 bytes encoded, and also make it play nicly with the parser. I decided not to do this, and instead use a nice feature of the webworker.

importScripts will synchronously load and run a javascript file, which is nice, because we can make our payload as long as we want now.

Here is the final payload (remember the * syntax is something I modified myself to set the pointer bit):

Running this with the ‘Guess The Flag’ test causes all the test cases to pass, and have it print the flag.

Now we just need to submit it so it will run on the remote server.

It took a few tries, because I kept getting 500 errors. (Although I knew it was working because I was getting requests for the payload file). Finally it went though: