LLVM Obfuscator is an industry-grade obfuscator which we have encountered frequently in the past few years of CTFing. This blog post documents our work in understanding the design of the obfuscator itself, as well as any possible weaknesses in the implementations of the obfuscation passes. We use this work to automate the task of emitting cleaned and working binaries via Binary Ninja.

The open source LLVM Obfuscator manifests as 3 relatively disjoint LLVM passes, each implementing some sort of obfuscation that obscures the CFG or arithmetic computation of the original program in some way.

Also note that, due to the fact that these passes operate over LLVM IR, it supports almost every architecture under the sun.

Information for each of the three passes can be found here:

Unfortunately, the llvm-obfuscator repo maintains multiple branches, one for each version of LLVM that that branch targets, with a clone of the entire LLVM repository, so it’s easy to get lost in the code. The passes for the 4.0 branch can be found here, in the lib/Transforms folder, as is customary for LLVM passes.

This blog post will focus on the control flow flattening pass, as we find it to be one of the most interesting passes in the LLVM Obfuscator ecosystem, as well as the most effective.

We can visualize the effects of the Control Flow Flattening pass as the following CFG transformation: 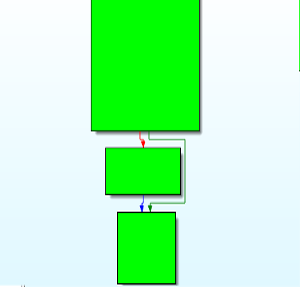 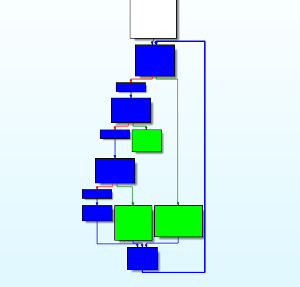 Here, green nodes denote the original basic blocks of the function, and blue nodes form the “machinery” which preserves the control flow semantics of the original program, mentioned before. At this point we name this machinery the backbone of the function, due to its shape in IDA (if you squint).

Another way we can visualize this CFG is by using IDA to group all of the blue basic blocks (i.e. the backbone) into a single node. This results in a CFG which appears closer to other control-flow flattening passes commonly seen in literature. 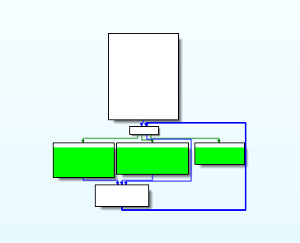 At this point, it’s clear that all control flow from the original program is completely obscured. It is also effective to note that this looks similar to a switch case statement, with each original basic block functioning as a case.

From now on we’ll be using Binary Ninja for the analysis of the control flow flattening pass. This decision comes from certain features present in Binary Ninja that aren’t present in IDA in any usable form:

In order to understand the weaknesses in this particular implementation of the control flow flattening pass, we’ll need to discuss the backbone of a function emitted by the pass in more detail. We’ll use the following example:

Shown above is a zoomed-in view of a node in the backbone of the previously obfuscated program. Pretty much each backbone node looks analogous; it reads the current state variable, and compares it to some case value. If it’s true, it executes an original basic block, or otherwise moves on to the next node in the backbone.

Now here is the first key weakness: given a definition of state_var, we can exploit the fact that each backbone basic block contains at least one usage of the state variable, and iterate through all uses of the variable provided by Binary Ninja’s medium-level IL to collect each basic block. 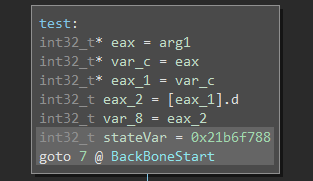 We thus target this definition of the state variable, as it is easy to find (via heuristics or via human interaction), and every backbone basic block that we’re targeting is reachable from it in the def-use and use-def chain graph.

As we can see, we write a constant to the state variable, and return to dispatch. This means that the next real basic block we’re taking corresponds to the case 0xfcbce33c. A real basic block with multiple successors is slightly more interesting, as the cmov gets expanded into multiple basic blocks in the MLIL view: 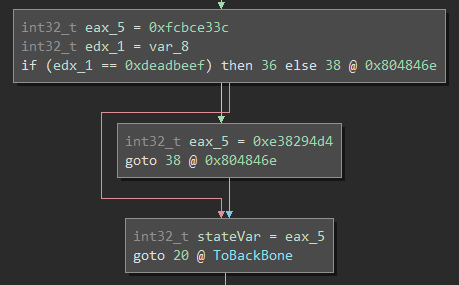 Here, we’re transforming the conditional from the original program into one which sets the state variable to the appropriate constant. In other words, the original source probably contained something of the form:

But this has effectively been transformed into

Although this transformation is interesting, our end goal is to find all basic blocks which are present in the original program. In order to do this, we note one more key weakness in LLVM-Obfuscator: all original assembly basic blocks contain at least one definition of the state variable, similar to the entry basic block.

At first glance, it seems we’d need to perform a recursive depth-first search on the def-use graph, though our task is in fact a lot easier. In the previous section we were looking for all usages of state_var, though here we’re looking only in the top-level:

Each of these top-level definitions to state_var are treated as coming from an original basic block, including the entry basic block. As we’ll see in the next section, this works quite well when it comes time to emit a cleaned binary.

At this point we have almost all the information to rebuild the control flow graph. As a refresher, we can currently compute the following information about an OLLVM-obfuscated binary:

The last piece of the missing puzzle is actually determining the outgoing state on exit of a basic block. To accomplish this, we may hook into a powerful feature of Binary Ninja, Value-Set Analysis, an abstract interpretation technique which computes a precise approximation of all values which could potentially be held in a register or in a memory a-loc.

As mentioned before, in the case of an unconditional jump state_var is set to a constant. This is easy enough to pick up given a new definition of state_var:

Dealing with conditional jumps is a little trickier. The goal now is to determine which of two possible outgoing states is the false branch, and which is the true branch. For this, we utilize the SSA form of the medium-level IL that we’ve already been looking at. 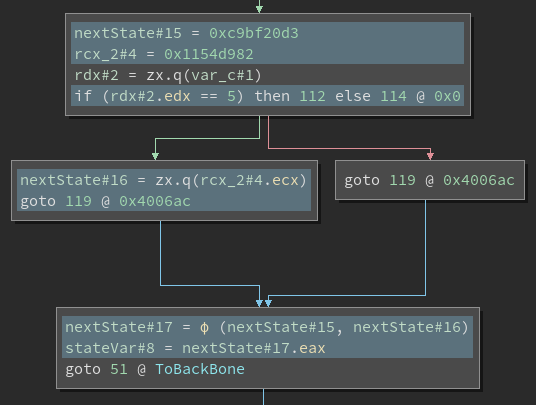 This shows an example of a block with two outgoing states in SSA form. The instructions that influence the selection of the next state have been highlighted here. We can better understand which state to choose by looking at the corresponding LLVM IR that produces this selection.

When compiled, this ends up having the general logic of:

Looking back at the SSA-MLIL above, we can see that in the phi node, we are choosing between two versions of the same nextState variable, each with their own version numbers indicating which was defined first. Following the select logic, we take the earliest version as the false state, and the other as true. Finally, taking advantage of Binary Ninja’s value-set analysis, we can get the original values of the two instances of nextState.

The API is currently a little awkward, but works immediately to get all possible values out of the assignment to the state variable at the end of an original basic block. Altogether, the core logic of our final script looks something like the following:

Unfortunately, patching programmatically is still a chore in Binary Ninja, though no other binary analysis framework seems to offer it either. At this point we’ve computed the original CFG of the program, all that’s left is to patch the original blocks so they jump to the next correct block(s) in the CFG, skipping the backbone.

We can visualize the result of these removals with a few examples. First, we look at the dead instructions in a block with an unconditional jump. There is no def-use chain to follow here, so not much change is involved. 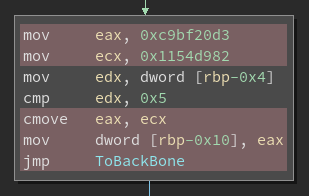 Removing these instructions leaves more than enough room for our own patches, while cleaning up dead code left by the flattening pass as a bonus. In both cases, we make note of the instructions that can be removed and move on to the next step.

In blocks with a conditional jump, we first need to determine which Jcc instruction to use in our patch. Earlier, we made the assumption that the CMOVcc inserted by the flattening pass always overwrites the false state with the true state. We know that the flattening pass preserved the control flow of the original program using this CMOVcc, so we can simply trust whatever condition it’s already using, and use that in our patch. So, for example, if the flattened program used a cmovne, we can replace it with a jne, and as long as we aren’t switching the true/false branches in the process the control flow will be preserved. The final patch then looks like:

With all of this defined, the patching process is simple. For each of the original basic blocks, we do the following:

After applying this, we end up with the following results for a block with an unconditional jump (patched block on the right):

And for a block with a conditional jump:

At this point the original CFG of the program has been completely restored.

After patching, the backbone is no longer reachable by anything in the CFG, so the entire thing is now dead code and can be replaced with nops. This step is not necessary, but disassembly tools that automatically run a linear sweep (i.e. IDA) will pick up the jumps in the backbone and display it along with the fixed CFG. By replacing everything with nops, we clean up the resulting CFG a little. We already computed the full backbone earlier in this process, so it’s trivial to go through the blocks and nop them all out.

To show the effectiveness of the deflattening, let’s look at how it deobfuscates a test program. Here is the original CFG of main, which is the end goal: 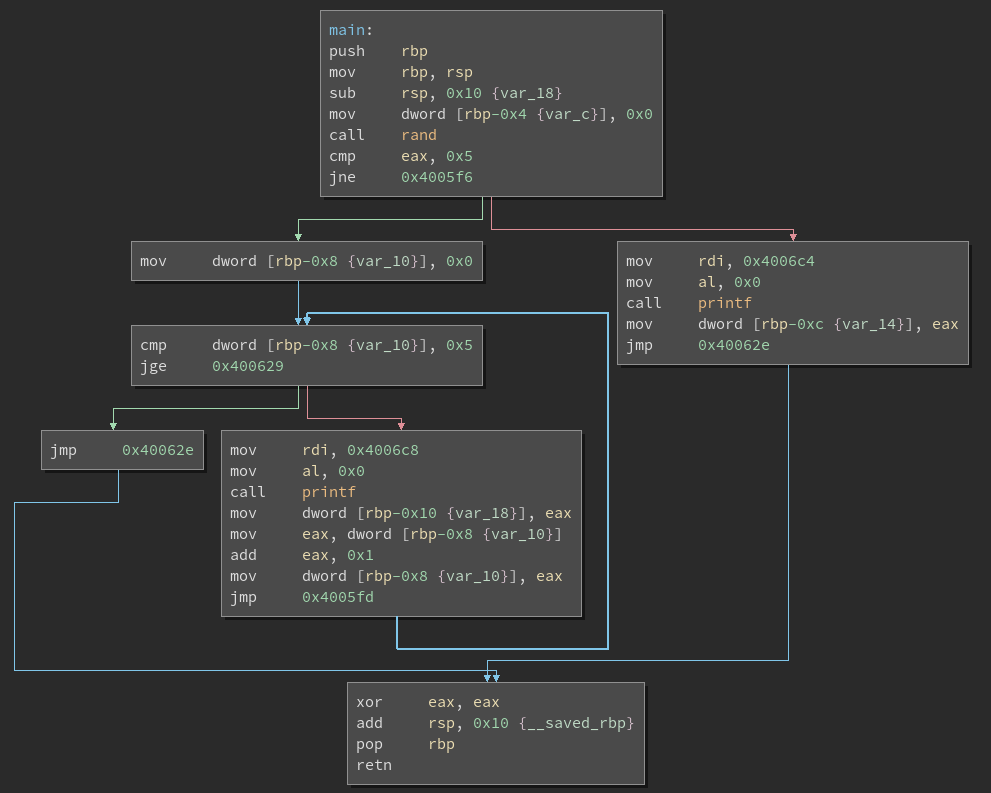 Here is the same function after applying control flow flattening: 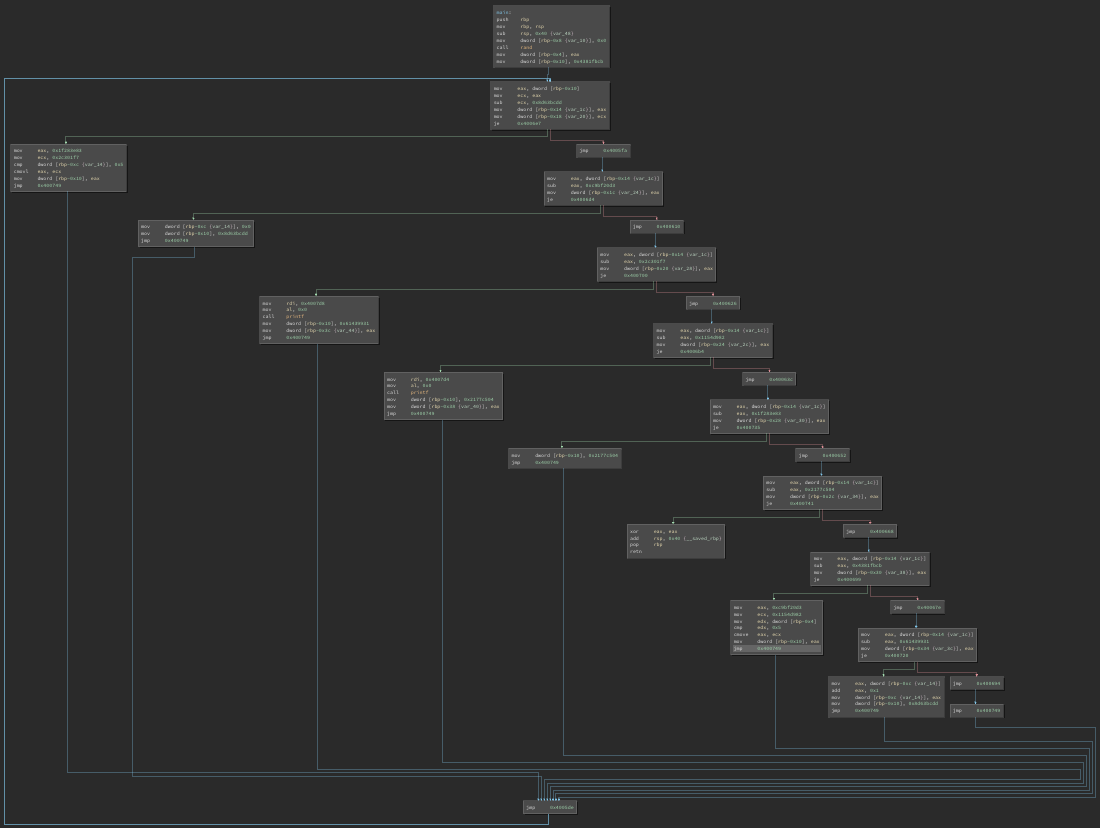 Here we can see the backbone running down the right side of the graph, with all the original blocks laid out on the left side.

Finally, here is the CFG after running the deobfuscator: 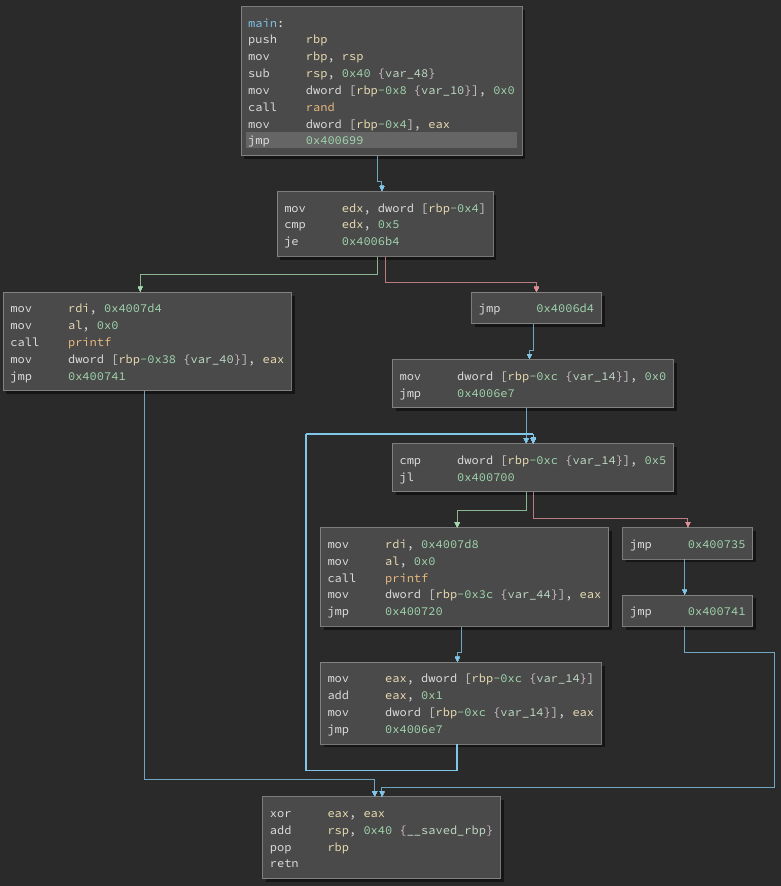 The recovered CFG comes very close to the original, with a few key differences:

Both of these issues can’t be fixed without dealing with relocating all of the blocks in the function, which is a much harder problem to solve.

The source for this plugin is available on github. You can install it by cloning the repository to Binary Ninja’s plugin directory.

The steps to deobfuscate a flattened function are:

The following clip demonstrates how to do this: